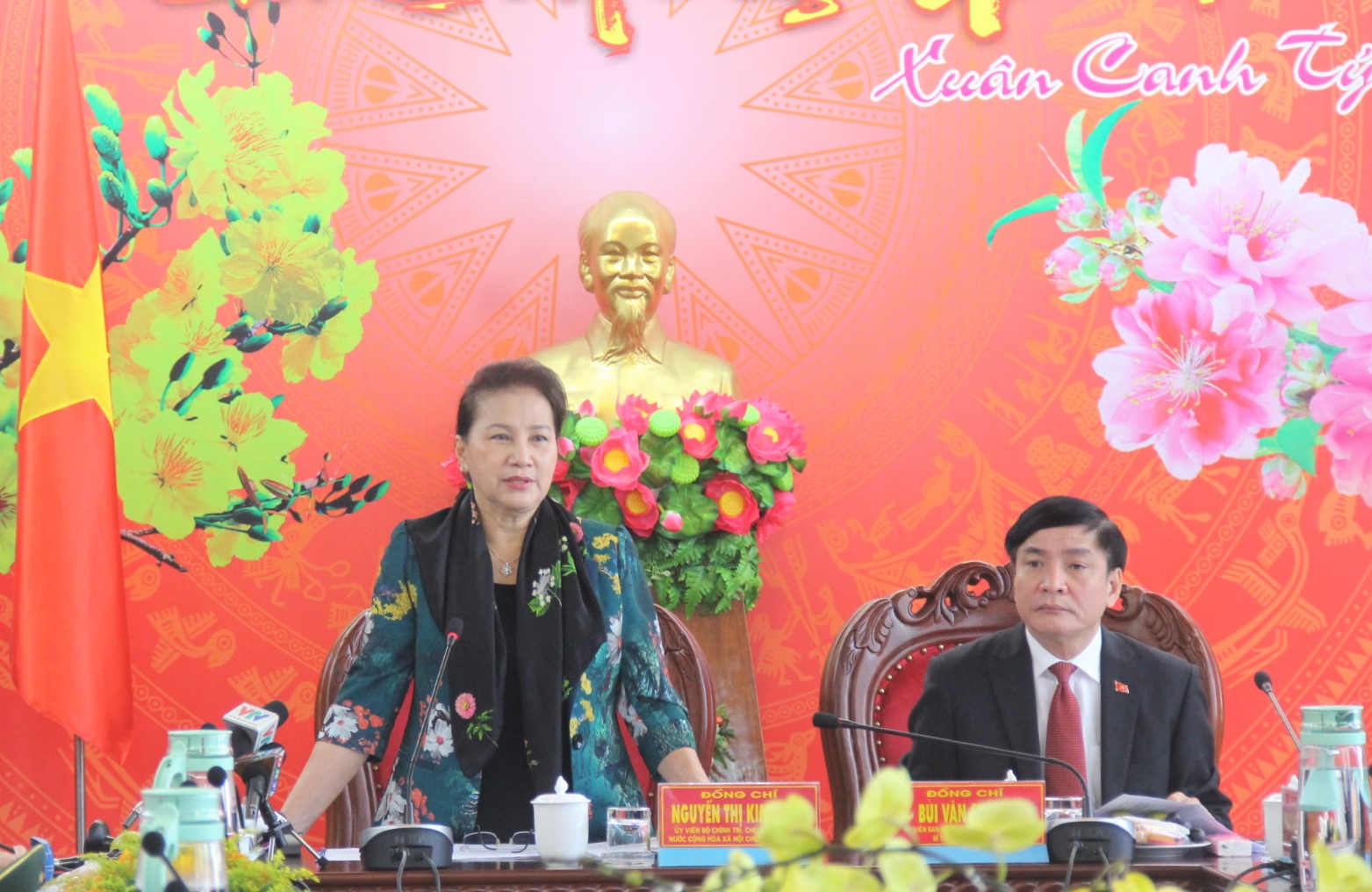 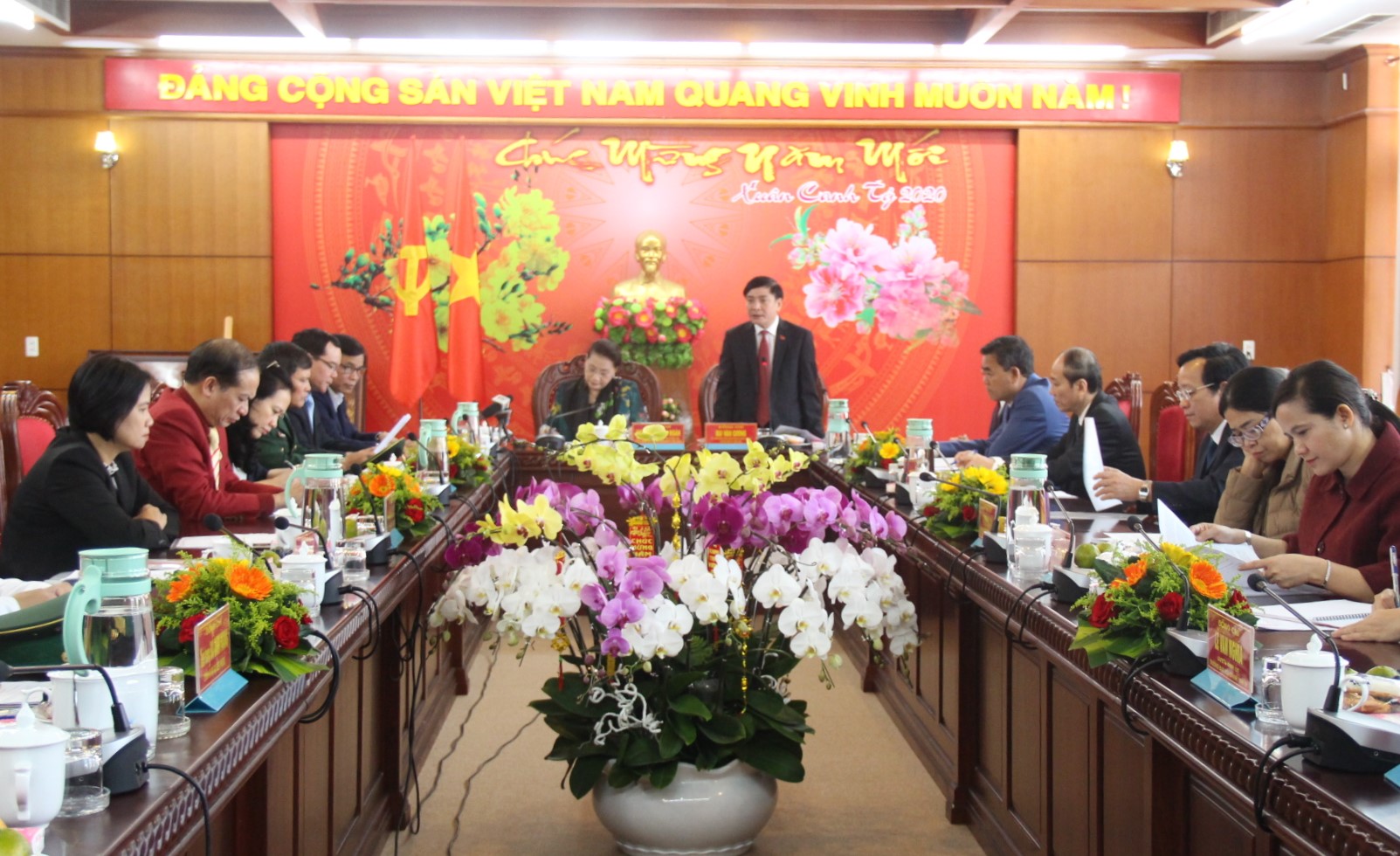 Overview of the working session

Leaders of Dak Lak province at the working session reported to NA Chairwoman Nguyen Thi Kim Ngan their activities to take care of officials and people of all ethnic groups in the province on the occasion of the upcoming Tet, their implementation of Law on Prevention and Control of Harms of Liquor and Beer Abuse, their outstanding achievements in socio-economic development and strengthening national defence and security, and also their key tasks for 2020.

Accordingly, in 2019, the provincial socio-economic development has increased stably, exceeding the target set by the provincial Resolution; the gross regional domestic products was estimated to achieve 56,250 billion VND; the annual per capita income surpassed 49 million VND; the local state budget collection stood at 7,375 billion VND, equalling to 108% of the Resolution’s target. Besides, the new rural construction program has achieved good results. Up to now, 52 communes of the province have met the standards of "new-style" rural areas; the Party and political system building also continues to be consolidated; the regional defence and security is maintained stably according to the province’s leaders. 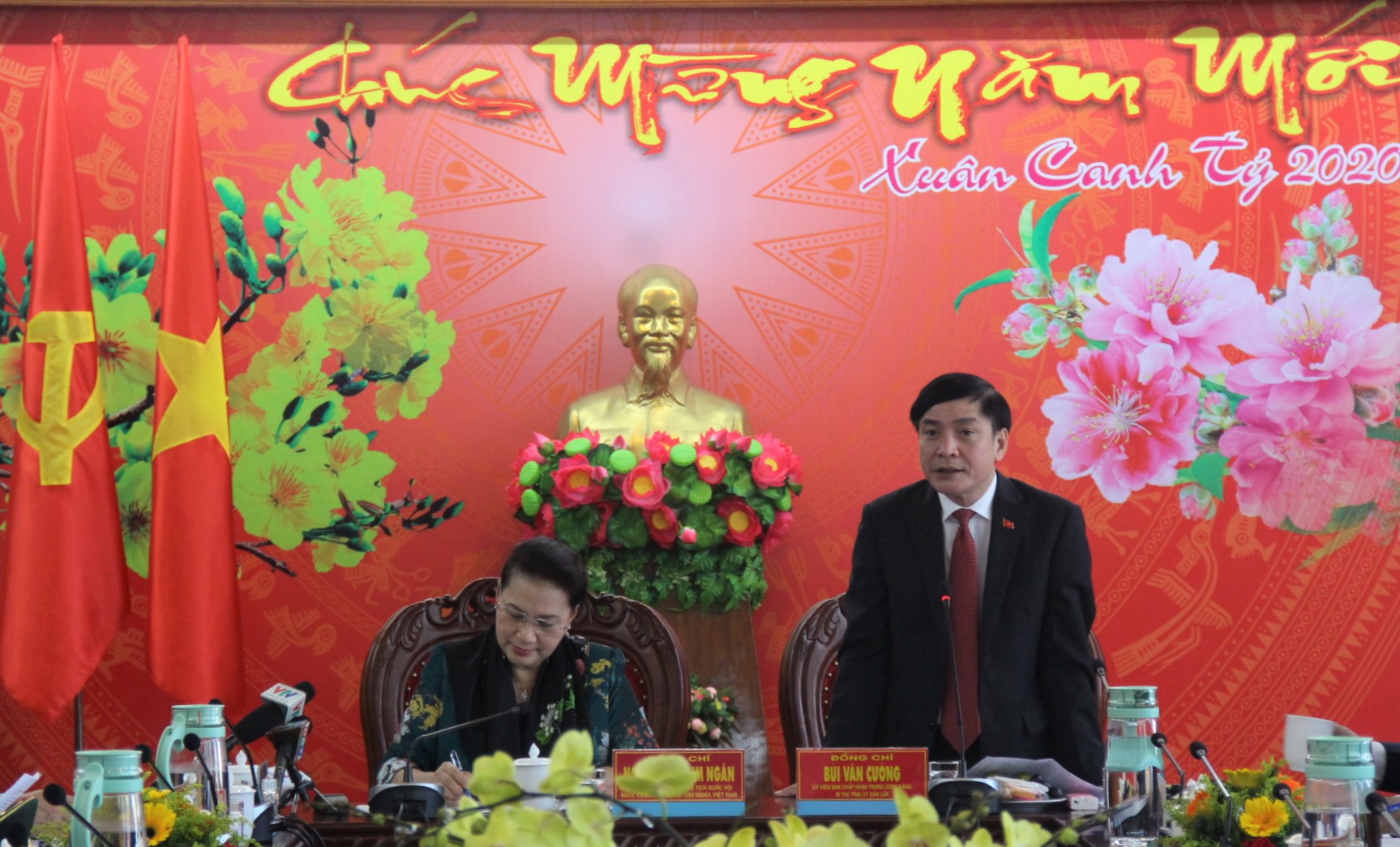 To well prepare conditions for people enjoying the new Spring and Tet holiday in a joyful, healthy, safe and economical manner, Dak Lak province has mobilized over 20,000 packs of gift with the value of about 60 billion VND to gift to poor households and policy beneficiary families. In addition, the province has spent over 40,2 billion VND for Tet greetings to agencies, units, armed forces, policy-favoured households, poor households and individuals.

Moreover, art performances to celebrate the Party – Happy Spring have been held simultaneously in districts, towns and cities of the province. Dak Lak has also strengthened the activities of strengthening regional security and order, traffic safety, preventing and controlling harms of liquor and beer abuse, ensuring food safety and hygiene before, during and after Tet holiday.

On the other hand, Dak Lak province proposed some suggestions and recommendations on the basic of the provincial achievements; particularly, allowing Buon Ma Thuot city to pilot some specific mechanisms and policies in order to ensure the consistency, correlation and similarity with other cities throughout the country; adding Buon Ma Thuot – Nha Trang highway to the master plan on development of Vietnam's expressway network through 2020, with orientations toward 2030; paying attention to investment in building border gates and sports complexes… 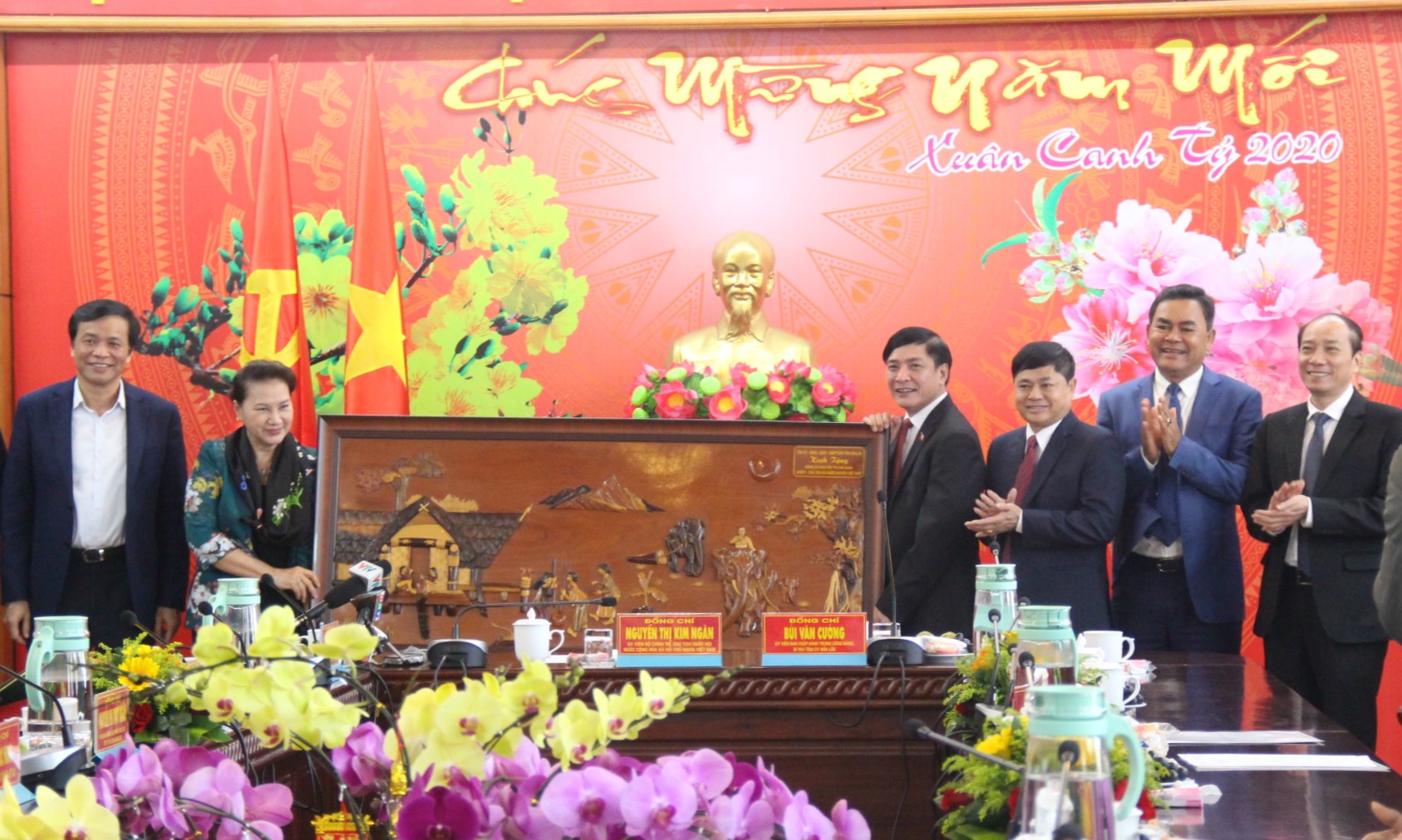 Speaking at the working session, Politburo member and National Assembly Chairwoman Nguyen Thi Kim Ngan recognised the province’s socio-economic achievements in 2019. At the same time, the NA leader emphasised an especially important location of Dak Lak in terms of culture, politics and national defence and security of the whole country. The top legislator asked the province to focus on building Buon Ma Thuot city to actually become the central urban area of the Central Highlands region; to strengthen connection with the coastal provinces of Central and Central Highlands in developing economic effectively in parallel with strengthening the ecological environment protection, the forest management and protection, and building the characteristics of eco-tourism to attract tourists to Dak Lak province. She also directed to continue maintaining the results of new rural construction and concentrating investment resources in building new rural areas for the remaining communes; preserving and promoting the traditional cultural identity of the province’s ethnic groups; building the Party and strong political system as well as maintaining the region’s political security and social order and safety. 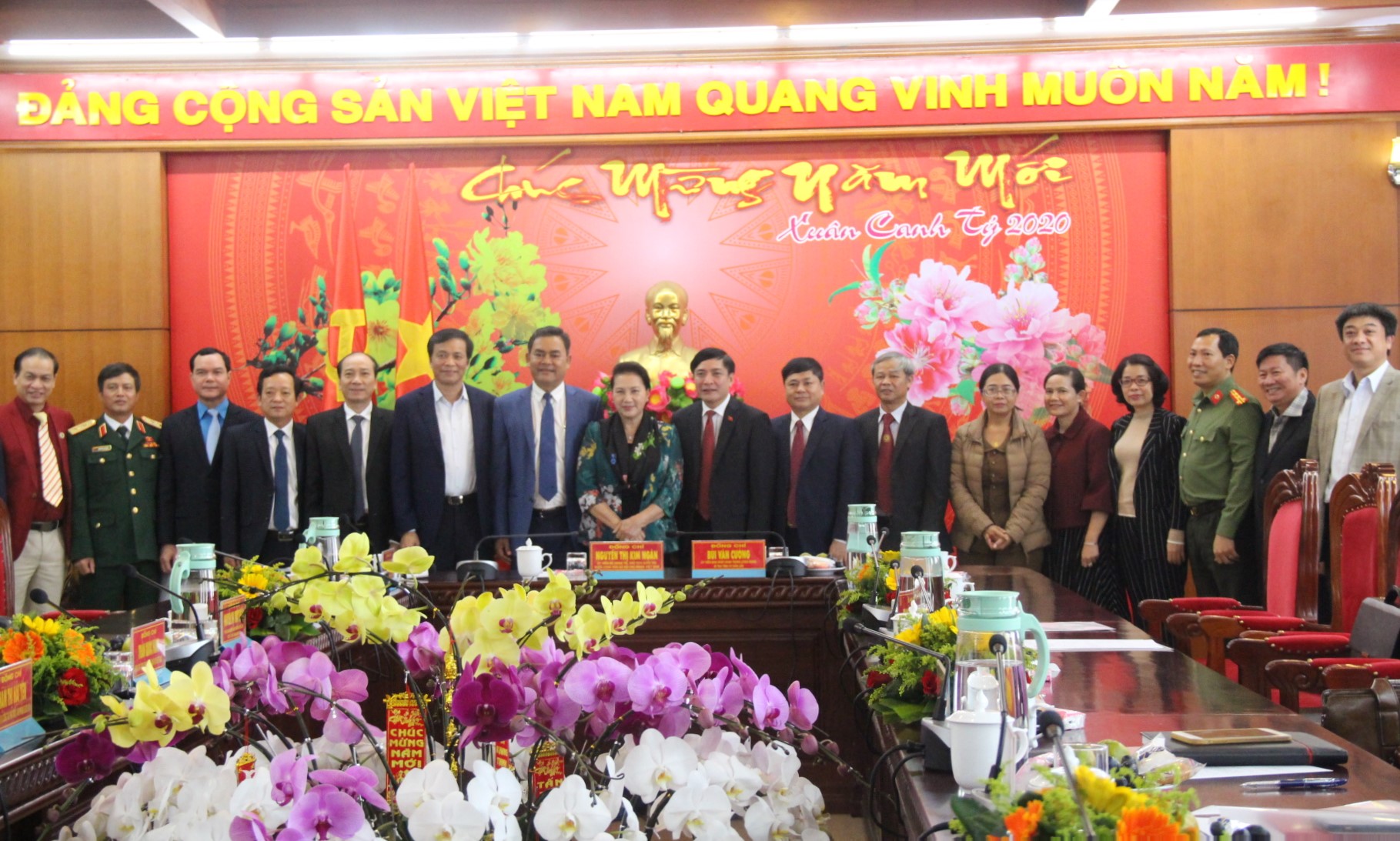 On the occasion of the upcoming Tet – the Year of Rat 2020, Chairwoman of the National Assembly Nguyen Thi Kim Ngan sent her best wishes to all officials, soldiers and people for the successful New Year to complete effectively targets and tasks according to the Resolution and plan set out in 2020 and subsequent years.