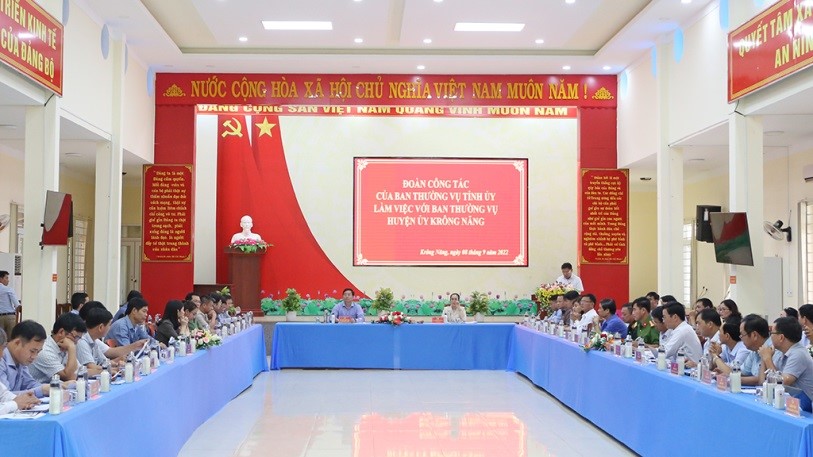 In the first 8 months of 2022, the implementation of tasks of Krong Nang District achieved many positive results. In particular, the socio-economic situation continued to develop. Activities of social security, poverty reduction, and people's health care were paid attention to. Administrative reform, especially reform of administrative procedures in service of organizations and individuals, positively changed. The situation of political security, social order and safety continued to be strengthened and maintained. Party building and political system building continued to be paid attention to. Activities of the government, the Fatherland Front and socio-political organizations positively changed. 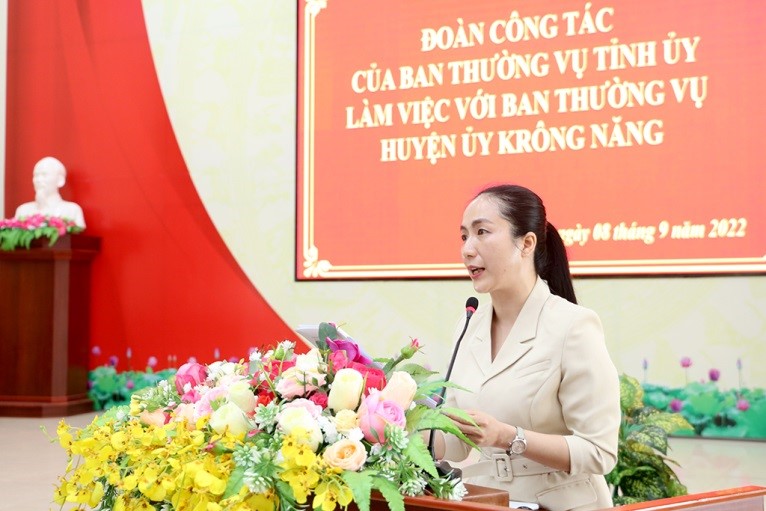 Ms. Nguyen Thi Thu An, Secretary of the Party Committee of Krong Nang District, reports at the meeting. 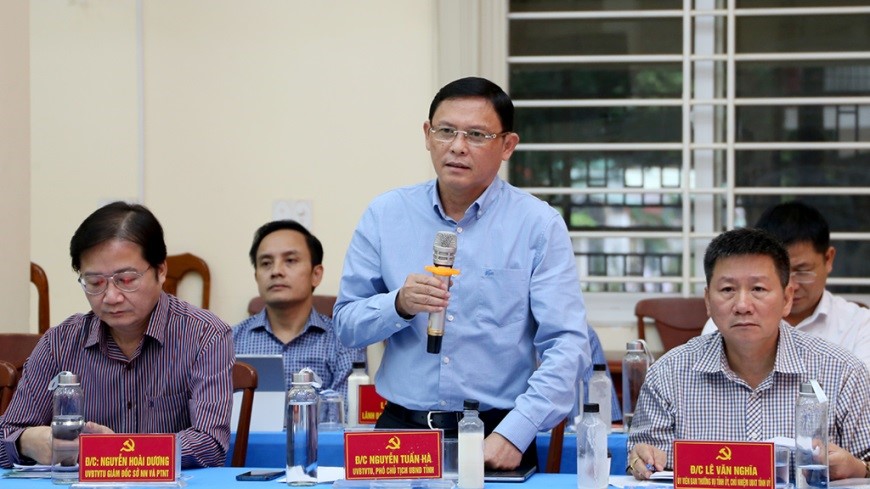 At the meeting, the delegation noted and answered recommendations of the Standing Committee of the Party Committee of Krong Nang District on: investing in upgrading and expanding National Highway 29 passing through the District, road from Krong Nang Town to Phu Loc Commune, Ea Toh - Ea Tan - Dlieya inter-commune road and Krong H' Nang Reservoir; completing procedures for the District to call for investment in ecotourism, resort and entertainment business activities at Thuy Tien Waterfall (Ea Púk Commune) and Son Long Waterfall (Ea Tam Commune); and requesting the Provincial People's Council and the Provincial People's Committee to consider and increase the allowance for part-time workers and for those who directly participate in the work of villages, hamlets, residential groups as well as increase the funding for the commune-level Vietnam Fatherland Front Committee and commune-level political organizations. 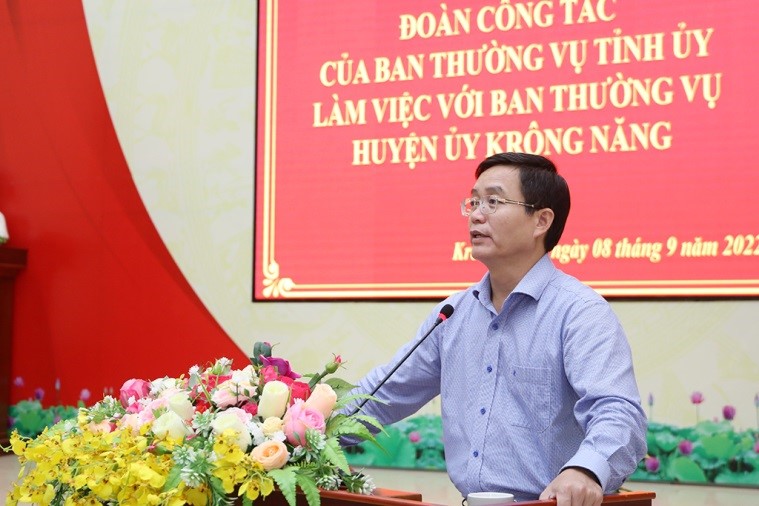 Concluding the meeting, Mr. Nguyen Dinh Trung, Member of the Party Central Committee and Secretary of the Party Committee of Dak Lak Province, suggested that the Standing Committee of the Party Committee of Krong Nang District should lead and direct to effectively implement the tasks. Besides, it needs to review the tasks and targets of 2022 associated with tenure 2020-2025 in order to promptly direct the District's branches and units to complete them well, even exceeding the set plan. Specifically, it is necessary to focus on directing and implementing targets and tasks that are still low compared to the plan, especially those that may not meet the resolutions and plans.

He emphasized a number of key tasks such as: effectively implementing certified agricultural production models and production chain linkage models suitable to the actual situation in the locality; regularly inspecting and promptly repairing and upgrading irrigation works and agricultural production works; well implementing land use planning for the 2021 - 2030 period of the District; directing, inspecting and urging the construction progress of key projects as well as implementing acceptance and disbursement of capital construction investment to ensure the achievement of the set plan; promoting investment attraction and creating conditions for investors to invest in the District; prioritizing investment attraction in hi-tech agriculture and processing industry associated with key local agricultural products; promptly implementing policies to ensure social security and take care of people's health and life; effectively implementing national target programs, job creation and vocational training for rural labor; strengthening the Party and political system building; and focusing on the implementation of the Central Resolutions, especially the 4th Central Resolution (Course XII and Course XIII) in association with the promotion of learning and following Ho Chi Minh’s ideology, morality and style according to the theme "Promoting the strength of great national unity, building and developing Dak Lak Province to become rich, beautiful, civilized and imbued with identity".